Trouble or Opportunity in Disguise? Remote Communities in WA Delivering to Local Government 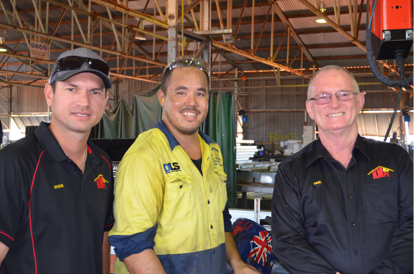 Red Ochre Director, Adrian Azzari-Colley was in the Kimberley last December and was fortunate enough to be invited to meet with the owners of Kimberley Manufacturing Pty Ltd (KMPL). This very exciting Aboriginal owned company manufactures steel roof trusses and wall frames for the Kimberley, and occasionally Pilbara housing and construction market. They have nearly 40 employees, around 30% of who are Aboriginal including 3 full time Aboriginal apprentices.

And the good news goes on. They have been recognized repeatedly with awards and commendations from the Master Builders Association, and the State and Federal Training and Apprenticeship awards, culminating in an outstanding win at the Australian Training Awards in 2012 for their innovative training programs involving Australian Apprenticeships.

Probably the most important thing about that award was that KMPL had taken on Aboriginal people, quite often with low literacy levels and helped them turn around their lives by giving them qualifications and a work history. This has enabled many of their past workers to go on to bigger and better jobs thanks to the help they’ve received from KMPL.

So what’s their secret to success? This is the question Red Ochre put to two of the owners, Paul Watling, Director and Brock Watling, General Manager. To understand the answer, it’s important to explain some of the history. The Watling family assumed 100% ownership of the company in June 2013 through a loan from IBA. Prior to that they had 50% ownership but to be able to build and structure the company the way they wanted it they need to take full control. IBA helped out with the necessary loan and they haven’t looked back.

But like any small business the KMPL has had it’s share of hardship. Paul and Brock spoke candidly about the retraction of the construction industry that started in 2012 and how it affected them. They had to work out how to survive and continue to prosper. Although any down turn is painful they felt that the experience had made them leaner, smarter and hungrier. They had broadened their customer base, not just large construction companies but they targeted the smaller builders as well to make sure that they were capturing a larger market share.  Paul and Brock both agree that to make the company grow and prosper they’ve needed 4 special characteristics, discipline and focus, a very high focus on quality, honesty and innovation.

And a very strong focus on building their most important capital-their staff.  Brock, whose mother is a local Aboriginal woman talked about working with their Aboriginal staff, supporting them and ensuring that training was delivered accurately and in a way that built capacity.

Brock is a certificate IV trainer and built the training plans to ensure that his staff were getting what they required from training. He even ensured that even in the non-trade areas the employees are assessed and given certificates of competency, something very few employers would do. Paul, Brock’s father, is understandably proud of the staff and the way in which his son has assumed control and supported the staff development process.

Both Paul and Brock acknowledged the very important assistance they had received from IBA in the form of finance to complete the purchase of the business. The Broome office has a great track record of achieving successes like this. Paul Watling said that “without IBA we just could not have done it”.

If you enjoyed this article, please consider sharing it!